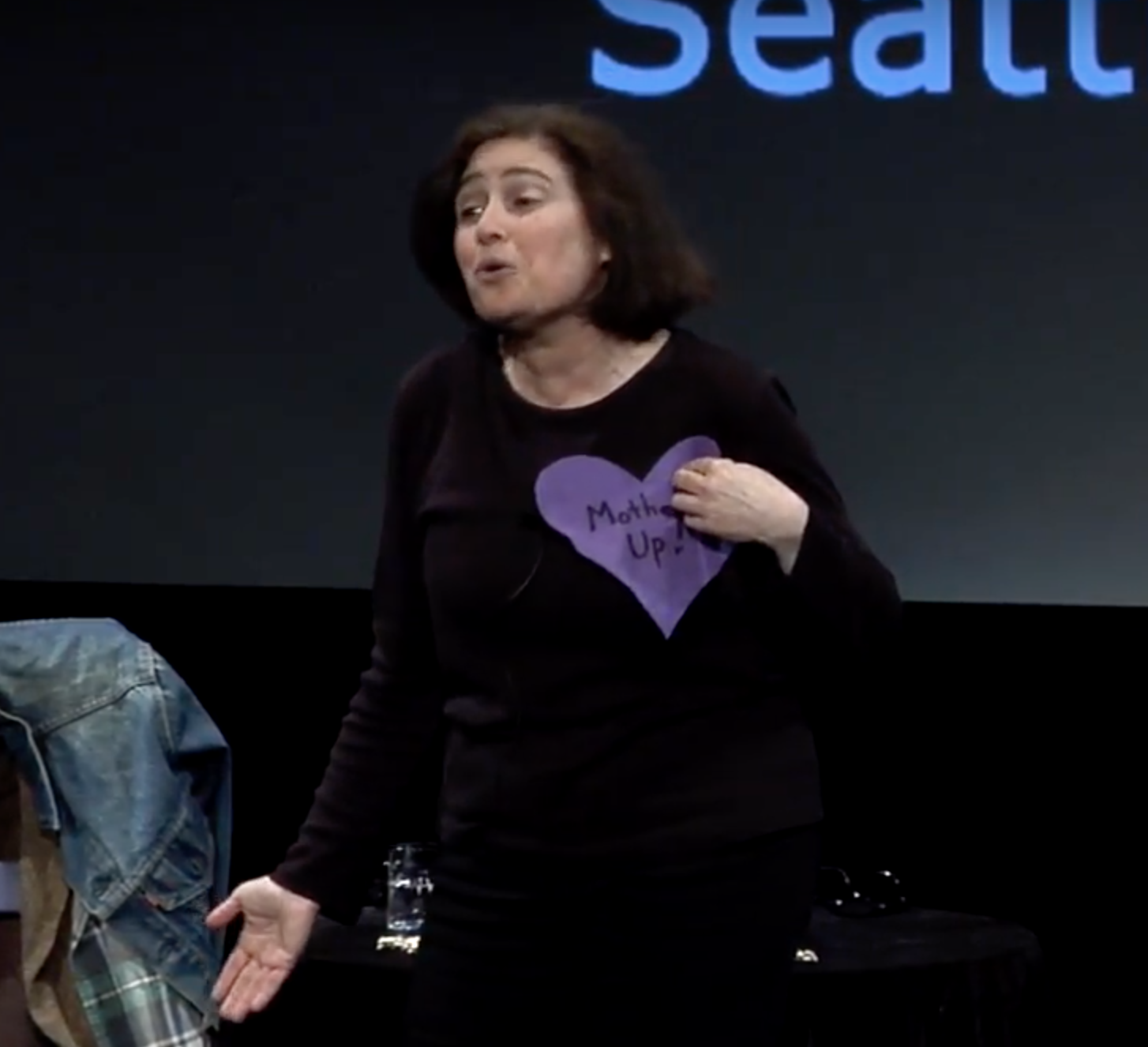 Above: Sharon Abreu as Abby Brockway of the "Delta Five", Seattle, Washington

“The Climate Monologues” is about:
Global climate change affects everyone on the Earth. The Intergovernmental Panel on Climate Change (IPCC) warns that our window of opportunity to cut our greenhouse gas emissions to a level low enough to stop the global warming trend over the next 100 years is about to close.

Although many people worldwide have been working to reduce greenhouse gas emissions, they are still on the rise. With all the good information we’ve had for years now, we are still not doing what needs to be done to reduce these greenhouse gas emissions – carbon dioxide, nitrous oxide, methane and others – nearly enough to stop the devastating effects on the Earth in the coming years – more frequent and severe storms, floods, droughts, forest fires, the spread of diseases and destructive insects. These sound like the pestilences described in the Bible. Still, we are not yet acting to prevent them.

This show takes audiences, in a compassionate way, on a journey around the world and into ourselves and our society to find out. It provides both catharsis and inspiration to help us reach the needed emissions targets in the next few years.

We make an effort to minimize our carbon footprint when presenting the show, using as little fuel as possible while traveling.


In addition to live performances, we have posted segments of the show on YouTube. (Click here and here.) Please also visit our pages on Facebook and LinkedIn.

The show is not political. It doesn’t promote any piece of legislation, political candidate or party, and won’t jeopardize any organization’s not-for-profit status.

Global climate change is a social, health, environmental, economic, and ethical issue that concerns all people. The purpose of the show is to bring people in the U.S. and around the world closer together and inspire people to take action on climate change in their own lives.

By presenting stories of real people and highlighting the human element in dealing with the very real challenge of climate change, it becomes clear how much we are connected to each other and to this challenge. It is a serious show, but also uplifting and inspiring, with a healthy dose of humor.

The show runs 70 minutes. After the show, there is an opportunity for feedback and discussion about the show and the issue of climate change.

Technical requirements are minimal. We show projections when a projector is available, and audio is needed for the pre-recorded musical accompaniment.

For bookings, questions, or inquiries about performing/producing the Climate Monologues yourself, please e-mail us at climatemonologues(at)gmail.com.

“The Climate Monologues” is a one-woman musical show about climate change. It brings to life onstage the stories of real people in the U.S. and around the world – people affected by climate change, and people working to solve the climate crisis. Their stories are told in their own words and through original songs that complement the stories.

The “one woman” in the one-woman show

Sharon began combining music and environmental education in 1993 after joining New York’s Hudson River Sloop Clearwater while studying voice in New York City. She educated herself about climate change, attending a symposium at the American Museum of Natural History and training to be a speaker with the Green House Network of Portland, Oregon.

Sharon has been singing and speaking about climate change for schools, businesses and community groups since 2000. She is on the roster of the EcoSpeakers speakers’ bureau.

Sharon has served as a delegate to the U.N. Commission on Sustainable Development since she was hired to sing at the U.N. in 1998. Her song Change in the Climate has been featured on Air America’s EcoTalk and WBAI’s EcoLogic. She performed the song at a special planning meeting for the New York Metro Region Input to the New York State Greenhouse Gas Action Plan. She has sung for U.N. World Environment Day and for 2004 Nobel Peace Prize winner Wangari Maathai. 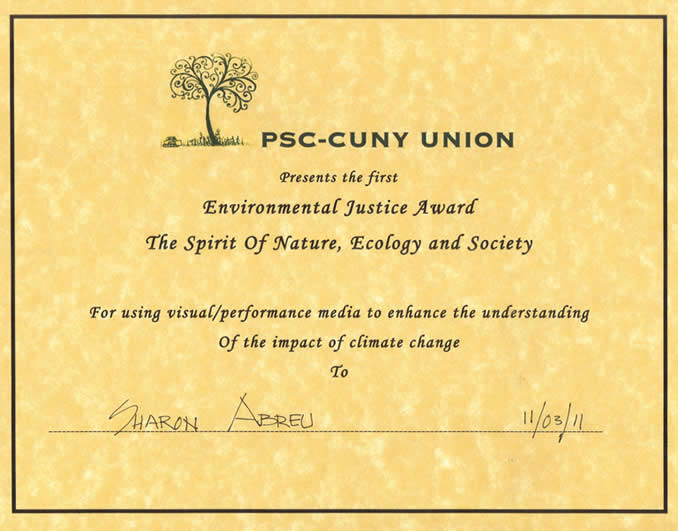 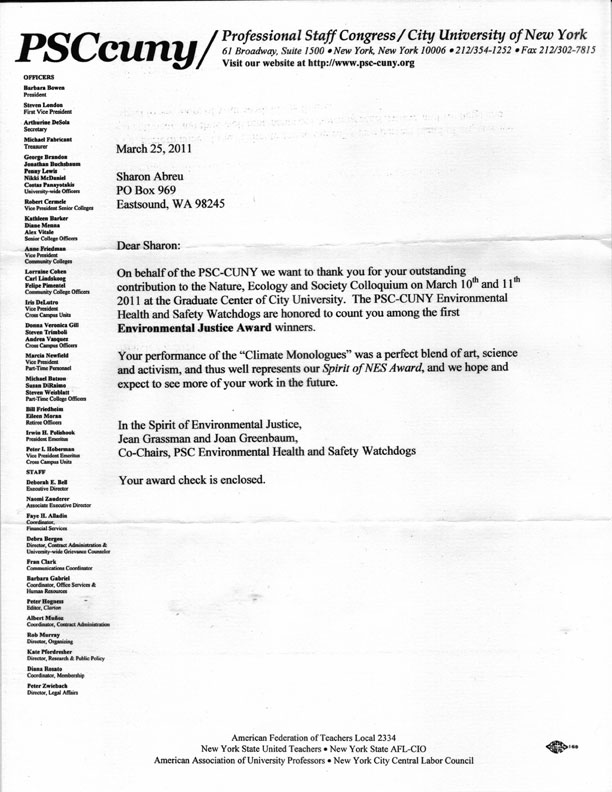 On March 11, 2011, Sharon Abreu received The Spirit of Nature, Ecology and Society Environmental Justice Award at “The Culture of Climate Change” Colloquium at the City University of New York (CUNY) Graduate Center in New York City.

Sharon received the award for her presentation of The Climate Monologues, which consisted of a 45-minute abridged version of the show, followed by a 15-minute question and answer period.

Climate change educators from across the U.S. and beyond who attended the presentation in the Martin E. Segal Theater responded to the presentation with long, enthusiastic rounds of applause and excitement at having been deeply engaged and moved by the characters portrayed and the original songs.

Click here for information about The Culture of Climate Change Colloquium.

For bookings, questions, or inquiries about performing/producing the Climate Monologues yourself, please e-mail us at climatemonologues(at)gmail.com.